Why we LOVE Santorini architecture – The most distinct sights 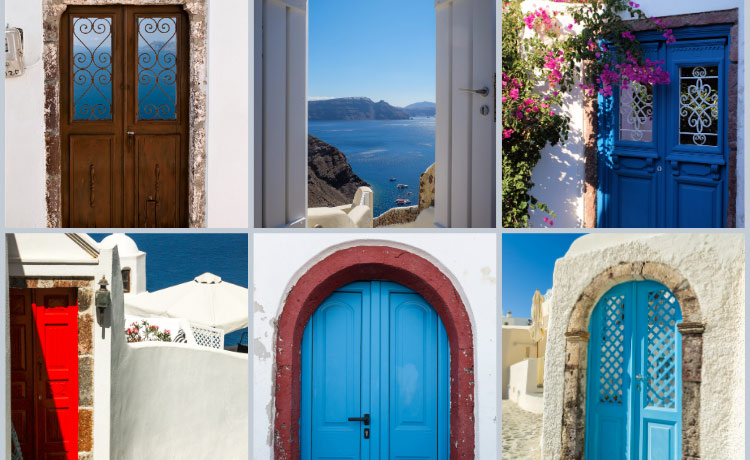 Besides beautiful and incredibly romantic sunsets, Santorini is also beloved for its distinctive architecture making the Princess of the Cyclades unique. As you will notice yourself while strolling the narrow, cobblestone streets of the island, Santorini architecture bears the same elements as the rest of the Cycladic islands. So, expect the typical blue-domed chapels, whitewashed houses, and paved paths. However, the peculiar landscape of Santorini has given its architectural style an interesting spin. Feel intrigued? Simply read on! 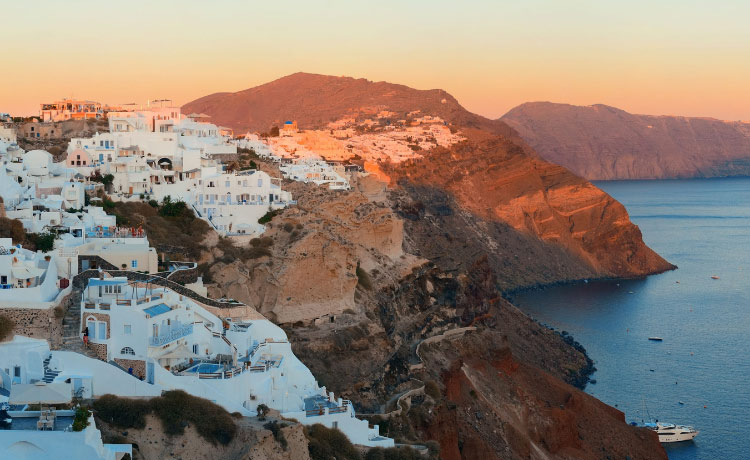 The Santorini volcano is the root cause of the adaptability and simplicity that defines the island’s buildings. Found in abundance all over the place, houses, churches, and other constructions are built with pumice stone, black igneous rock, volcanic dust, and red rock.

Now, if we had to pick two characteristic Santorini architecture features, these would probably be the cave houses and the domes. Both extremely easy to construct without costing an arm and a leg, the first used to serve as the residences of the poorer islanders who had to provide a shelter for themselves using whatever nature provided. 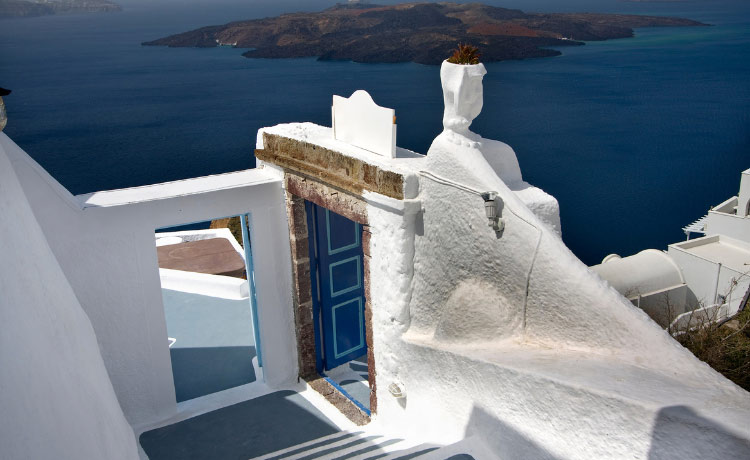 The Santorini Caldera hosts several settlements that literally hang on the very edge of the caldera cliff. Other villages, on the other hand, are found outside the kastelia (another word for fortified castle-towns) in different directions. These settlements date back to the 14th century and feature a special Santorini architecture of sheer defensive nature. This is because their purpose was to protect from pirate invasions that were very frequent back in the day. Finally, some settlements are rock-nestled. 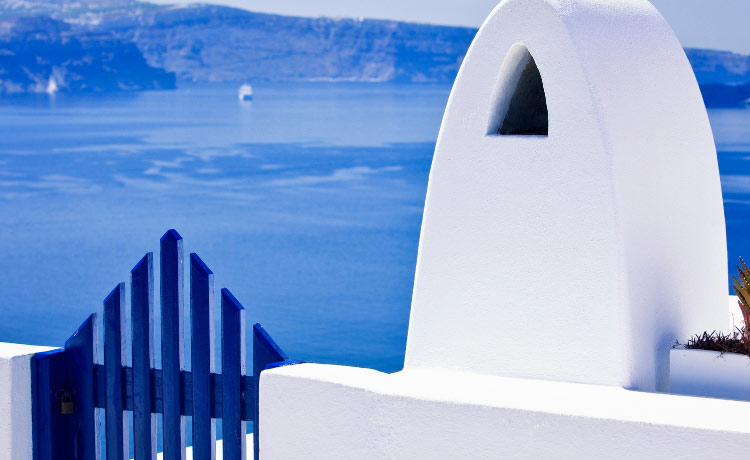 Want a list of the most famous settlements on the island to start your Santorini explorations? You can start with the tiny Oia village. You will be graciously rewarded by not only the bizarre allure of the place but also the picturesque Santorini sunset vistas!

The even better news? Thirea Suites, your favourite Oia Hotel in Santorini, is within walking distance from the scenic village while offering heart-stopping views of the Aegean Sea and the volcano!

You will find two different types of homes on the island, depending on their style and structure. So, we have: 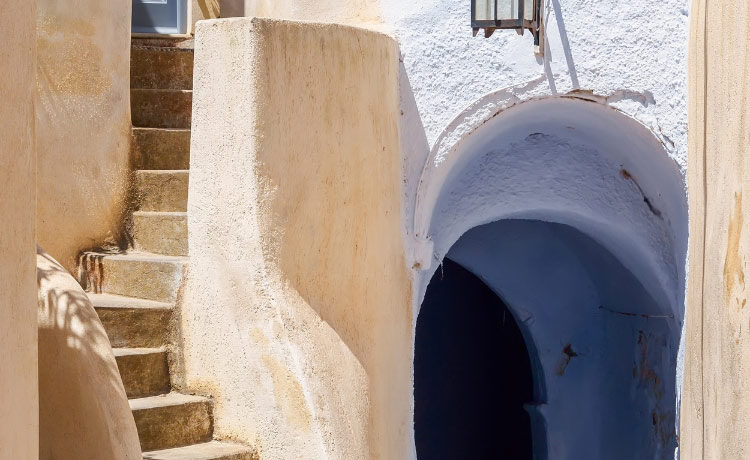 1. Cave houses (aka yposkafa) – They are partially dug into the volcanic rock with additions on their exterior areas (i.e., the bathroom) and typical residences on the ground. Cave houses are deep and long, with windows and narrow facades and covered by domes of varying shapes and sizes. The front areas that got the most natural light hosted the living rooms while the bedrooms were built in the back, with the kitchen and the fireplace lying in between. The yards are whitewashed and feature a water tank that provides the family with water from the rain.

2. Farmers’ homes – They are common in the fields or on the edges of a settlement. You can tell a farmer’s residence by the many storage spaces, the large courtyard, the stone oven, the barn for the animals, the water tank, and, of course, the underground winery with its fab arched doorways (aka cavana). No wonder, as the rich volcanic soil helps make the famed Santorini wines!

3. Urban homes – These are usually multilevel constructions built in the center of the villages, very close to one another. They come in different (uneven) shapes and are decorated with a few basic pieces of furniture. Urban homes come with some extra storage spaces but have little-to-no room for extension. Don’t be surprised if many urban homes are close to the famous Santorini Hot Springs! It appears that people living in these dwellings knew how to enjoy their lives! 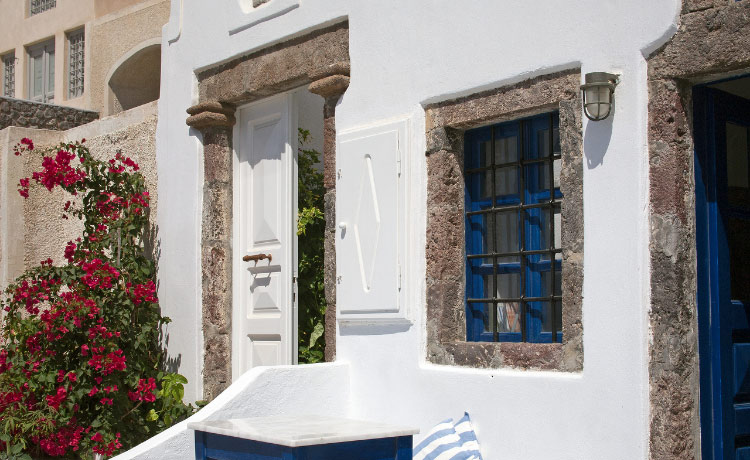 4. Captains’ homes – You will be able to pinpoint a captain’s home by the Neoclassical and Renaissance influences that differ from traditional Santorini architecture. Wonder how come they are so much different from all other types of houses on the island? The 20th-century prosperity led to the construction of such wonderful and elegant residences that blend harmoniously with their surroundings. Captains’ homes are, as one would expect, much more spacious than other houses, with big water tanks, large yards, arresting facades, and multiple stories.

Tip: Of all prestigious Oia Santorini Hotels, Thirea Suites provides guests with the most comfortable, superior suites that share architectural details from the enchanting Cave houses and combine masterfully with modern amenities, such as private Jacuzzis and verandas. 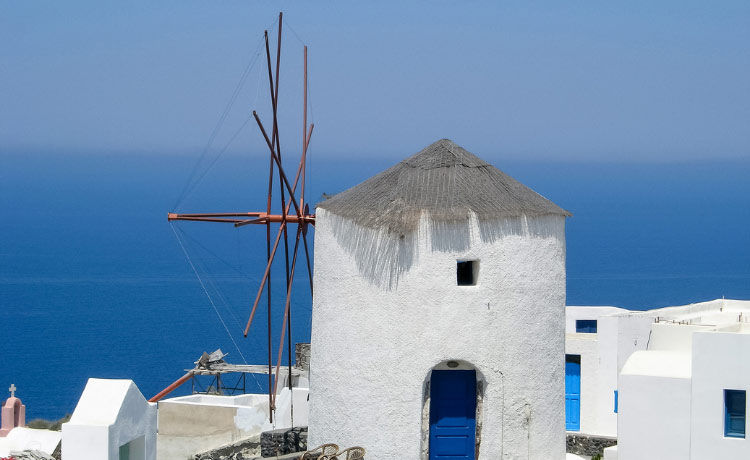 Another lovely sample of Santorini architecture is the windmills. Counting around 70 of these some centuries ago, only a handful still remain on the island. Many of them are now turned into holiday lets and housing. Although the windmills are scattered all across the island, the most beautiful and iconic structures are found in the charming village of Oia, Santorini, and date from the 17th and 18th century. 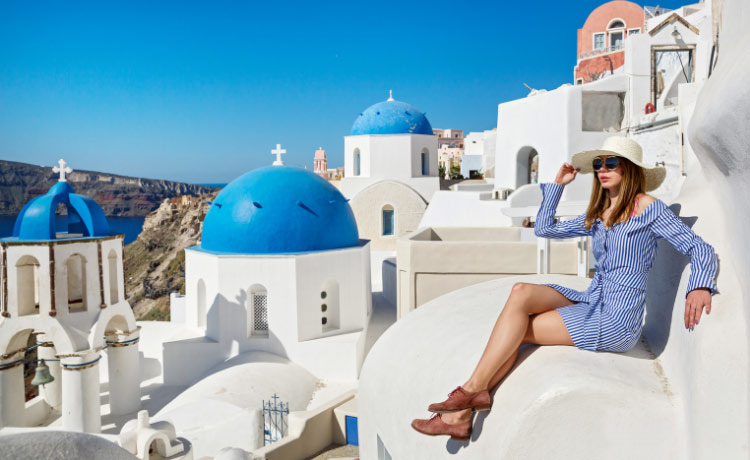 Ever wondered why the island’s houses are roofed with blue domes? This has to do with the Greeks’ need to revolt against the Ottoman Turks that took over Greece in the 1450s and did not allow the Greeks to showcase their nationality and represent their patriotism for it. The houses were then painted in white, which also helped keep them cooler during the hot summer months, and shades of cyan, light blue, ochre, brown, and dark red. Between the late 1960s and 1970s, a Greek military government established its power and ordered all houses to be re-painted in white and blue to display uniformity across the landscapes and reflect the colours of the Greek flag.

Today, you can see some of the most gorgeous Santorini Blue Domes churches in Oia and the island capital. You will definitely be taken aback by the admirable frescoes, grand cathedrals, and dug-into-rock churches with the white edifices, adorable bell towers, and the blue domes that surround Oia and Santorini as a whole. 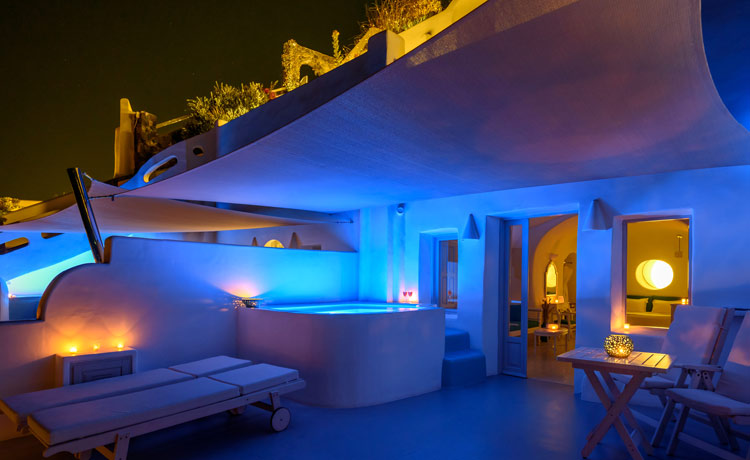 Although you will be spoilt for choice, your best shot is to ensure a room overlooking the Caldera, the island’s most impressive feature that also offers incredible sea views (and not only). In fact, thousands of newly-weds choose a Thirea Suites Santorini honeymoon suite. Can you blame them? They have everything you could possibly imagine for a dreamy stay on the most romantic Mediterranean island.