Wandering the cobblestone streets of Santorini and the settlements atop the Caldera will instantly overwhelm you with a sweet sensation of Old World charm. Indeed, the scenic Santorini villages seem as if they have popped out of a history book, serving as proud reminders of a past that shaped not only the morphology of the beautiful Cycladic island but also the lives of its inhabitants.

Now, if one wanted to create a list of the must-see Santorini villages, their task would be extremely challenging. Indeed, each settlement enchants with its own appeal, and each has a different story to tell. In an attempt to make your task a bit easier, we give you 8 incredibly alluring areas in the Santorini map that will probably feel like love at first sight. 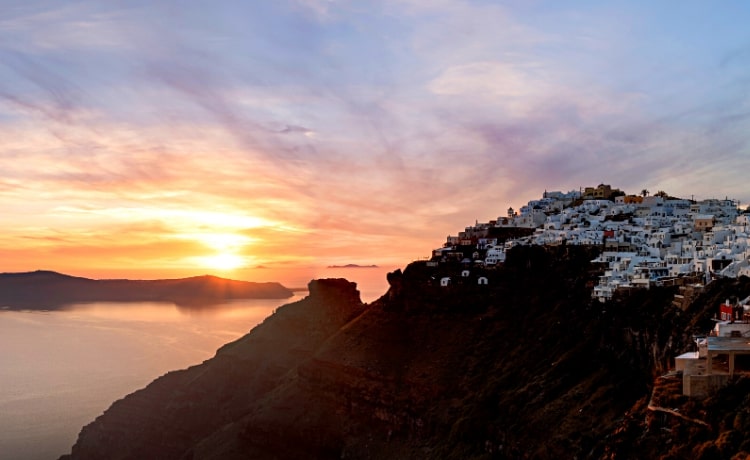 Just a few kilometres from the island’s beating heart, Imerovigli poses from the Santorini Caldera and impresses with its splendid views of the Aegean and the Caldera. The idyllic village boasts an imposing rock that is home to the ancient ruins of a medieval castle called Skaros. In the surrounding areas, you will find plenty of restaurants, cafes, and hotels, as well as churches with delightful blue domes – a distinguishing feature across the entire island.

Note: The Caldera is probably the most visited local attraction, offering unique sights of the once active volcanic crater. For that reason, the most exclusive Oia Santorini hotels, including Thirea Suites, are built to provide spectacular Caldera views and seascapes, along with utmost privacy and convenience. 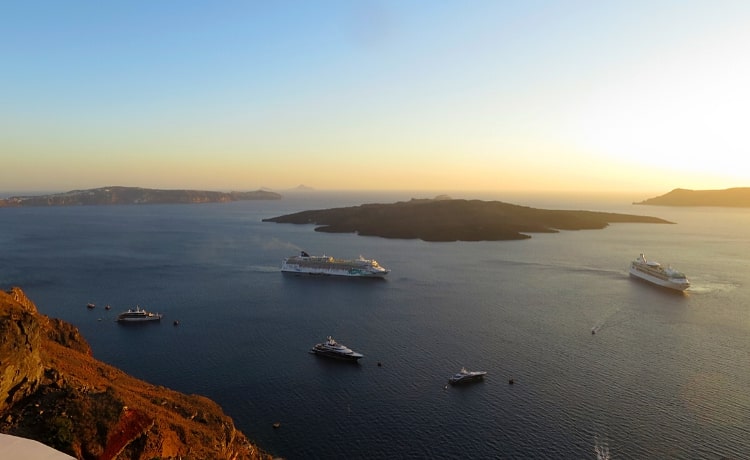 Fira is the economic and cultural heart of the island and the Santorini capital. It is one of the most populated Santorini villages located right opposite the volcano. While here, you can also visit the volcanic islands of Nea Kammeni and Palaia Kammeni or take the cable car from the old port and get a bird’s eye vista of the delightful settlement and the Cyclades as a whole.

Fira is also a lively part of Santorini with a vibrant night scene featuring lots of bars, cafes, restaurants, shops, and other facilities that are open till the small hours. Two outstanding landmarks worth exploring are the Megaro Gyzi Cultural Center, the Museum of Prehistoric Thera, and the Archaeological Museum of Thera. Tip: Most Santorini tours include stops at major local attractions, including these museums and, of course, the Caldera. 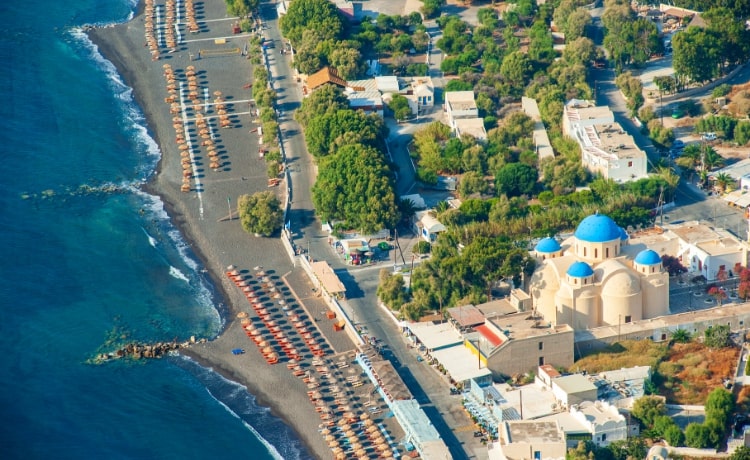 Perissa is mostly known for its peculiar shore with the black sand, which is the result of intense volcanic activity some years ago. This coastal settlement on the southeastern part of the island is also home to the Ancient Thera archaeological site, a stunning mountain range, and one of the two longest beaches in Santorini. If you are looking for Santorini villages with crystalline waters and unsurpassable natural beauties, then this is your spot. Note: Another dreamy village with a black beach is Kalamari that provides all the amenities of a seaside resort, including water sports facilities, a long beach promenade, and diving centres. 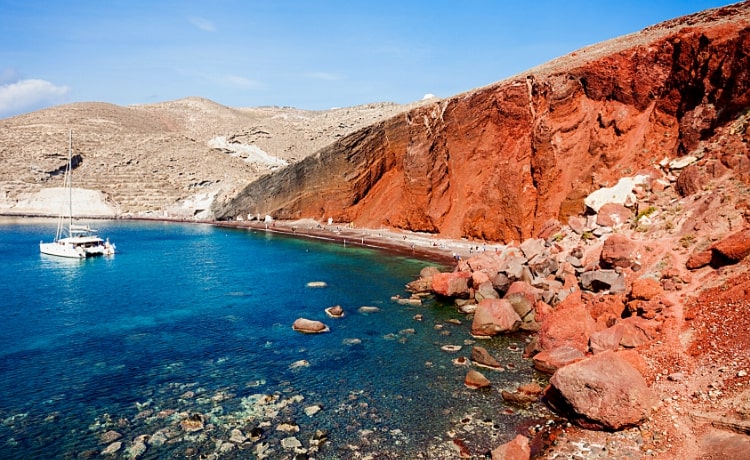 Akrotiri Santorini allures with its Red Beach and its prestigious location. Built on the southern coast of Santorini, its amphitheatrical construction enables visitors to understand why it is so frequently referred to as the Greek Pompeii. Before it got destroyed by a huge volcanic eruption and covered in volcanic ash, Akrotiri used to be a wealthy Minoan settlement. Today, it feels like a still-smoking gun narrating a story never forgotten as you walk through the ancient ruins, scenic alleys, and picturesque houses with the milky walls. 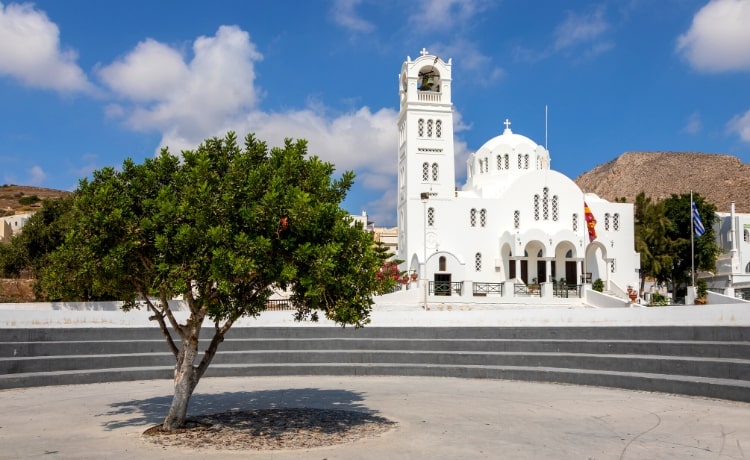 Many tourists admit that Emporio is the most cosmopolitan of all Santorini villages after Fira, Imerovigli, and Oia. Nicely tucked at the foot of Mt. Prophet Elias at the center of the island, Emporio has a powerful sensation attached to it. Being a mighty fortified town, it is the island’s most representative Medieval settlement, with influences of the Middle Ages still prominent (i.e., the Kasteli fortified castle).

If one of the top things to do in Santorini includes exploring churches with impressive bell towers, Emporio will please you for sure, with the marble-built church of Agios Nikolaos Marmaritis definitely being a must-visit. Besides, the once significant commercial center of Santorini is now home to 8 traditional windmills and the Tower of Nimborio, both offering spectacular panoramas. 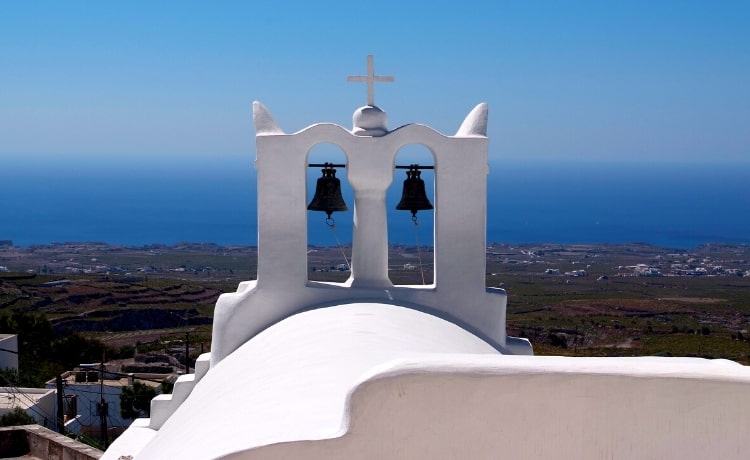 Its name translates as The Big Village, and Megalochori certainly lives by it. It lies in the most abundant and verdant part of the island, where most wineries are, and allows visitors to get a glimpse of the rich Santorini wine-making tradition. A bit different than other Santorini villages, Megalochori will dazzle you with its neoclassic residences that still bear characteristics and elements borrowed from traditional Cycladic architecture, though. Feel free to explore the winding alleys and see where they take you! 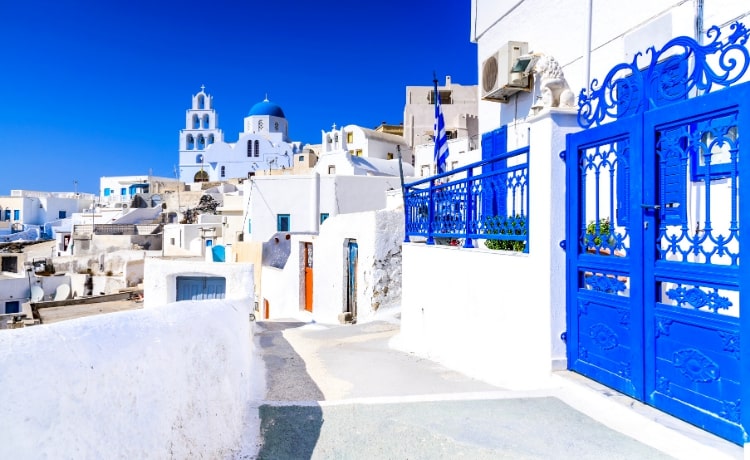 Pyrgos used to be the capital of Santorini before it gave the reigns to Fira. Occupying a pristine location at the highest point of the island, it offers unparalleled vistas of the island and some of the most captivating Santorini sunset panoramas that can only be matched by the ones you can get from Oia.

While strolling the meandering paths of Pyrgos, you will be greeted with a predominant view of a Venetian castle that gently gathers traditional houses around it. Do not leave without visiting the Monastery of Profitis Ilias, though. You will find it atop the mountain of Prophet Ilias and will reward you with ravishing panoramas of the amphitheatrically-built settlement and the island. 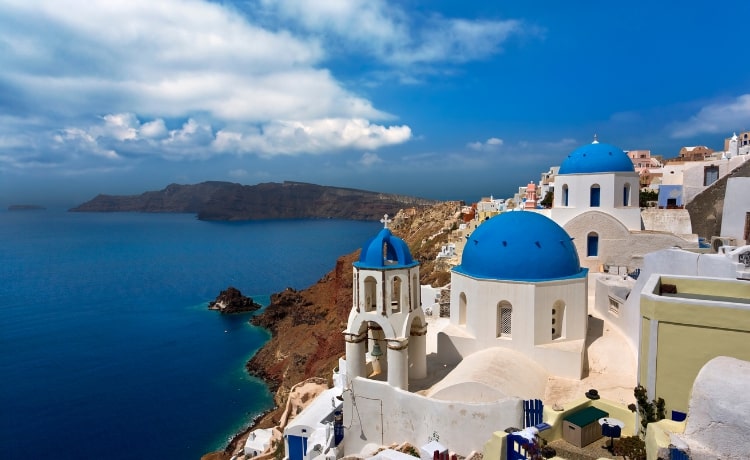 Known for its hypnotising and utterly romantic sunsets, Oia Santorini is the most photographed of all villages in Santorini. Adorning the northern coast of the island, Oia also captivates with a magical scenery comprised of adorable dollhouses of blue, pink, and white shades and attractive sea captain residences with unique architecture.

However, the most impressive feature of Oia is the traditional cave houses, some of which have been renovated and polished and now serve as 5* Oia Santorini hotels or luxury studios, including Thirea Suites. The most remarkable about Thirea Suites? Although Oia is such a crowded and popular place, especially among a-lists and celebs, Thirea Suites offers maximum privacy and the chance to relax and enjoy your time with your significant other. Definitely a hard-to-find element in Oia and Santorini overall. 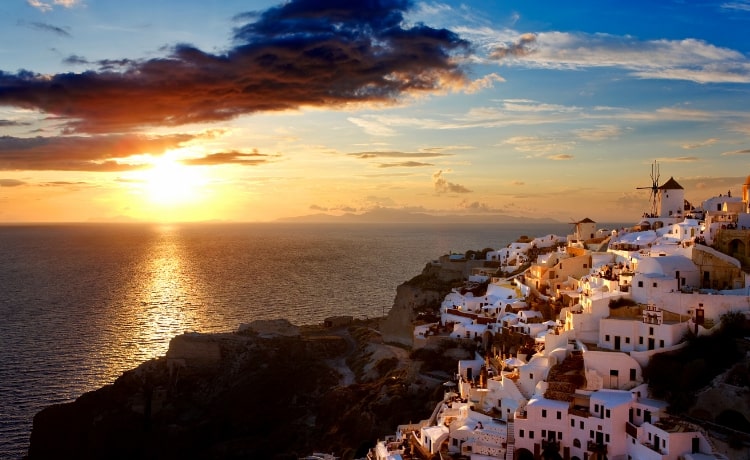 Whether you are here for a dreamy Santorini honeymoon or to experience the allure of this beautiful Cycladic island in every way possible, we wish you lots of unforgettable moments!